Fire Glass Studio held an Open House to celebrate its one-year anniversary. Fire Glass Studio offers glass fusing art classes and workshops to children and youth, families, and adults. Owner Michal Hasson said she was delighted for the opportunity to introduce a creative and enjoyable art form to communities throughout the San Fernando Valley.

“Our studio shows all our students how to take their imagination and bring it to life in a beautiful art form that is simple to learn, but has endless possibilities they can explore.” said Hasson. “We are constantly touched by the personal growth stories we get from individuals after just taking one class.”

The Open House featured gallery exhibits from glass art students and several independent glass artists, who use the studio space to enhance their art projects. In attendance were prominent glass artists, but also a number of visitors who had just discovered Fire Glass Studio. According to Hasson, guests were thrilled to discover the variety and quality of the colorful artworks on display, and, as an added bonus, they were given a chance to try their hand at creating their own one-of-a-kind fused glass art. Even some curiosity seekers found themselves at a craft table learning how to combine different shapes and colors of glass to make their own eye-pleasing keep-sakes.

Fire Glass Studio’s in-house artist and head of teaching, Darren Frale stated, “It is so much fun to see someone try their hand at glass fusioning for the first time. Watching someone go from ‘I could never do that’ to ‘I can’t wait to do it again’ makes what I do so worthwhile. Frale, who is a graduate of the Corning Museum of Glass as well as the famous Glass Furnace studios and a contributor at Santa Monica college’s Glass Art program, is an avid glass artist, who loves sharing his skill and passion with the student’s at the studio.

“We feel we have just begun to bring the special value of fused glass art to all kinds of communities and people,” said Hasson. “We can’t wait to see what we will achieve in the coming year.” 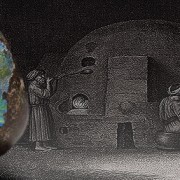 Scott Adams, the creator of Dilbert, once said “Creativity is allowing yourself to make mistakes. Art is knowing which ones to keep.” Thanks goodness the people who first found a way to soften and mold glass as an art form, decided it was worth while enough to chronicle and pass onto following generations so that even today, thousands of people are still able to discover their creative ability through this beautiful and fulfilling Visual Art form.

No one knows exactly where Glass Fusion began, but it is suspected to have originated somewhere between the 3rd and 2nd century B.C. Of course, natural glass fusion is as old as time itself in that nature has been creating “glass art” ever since the first lightning bolt hit a piece of sand. The resulting instantaneous melting of the silica into irregular hollow glass tubes has long fascinated scientists and artists alike. Depending on the composite materials in the sand, Fulgarites as they are commonly called, can be formed in a variety of colors, sizes and shapes.

Man-made glass for utilitarian as well as Glass Art is thought to have emerged from the Mesopotamian and Egyptian cultures as far back as 3500 B.C. and quickly spread to Africa and the middle-eastern societies of the time. In time it spread to Asia and the central European societies. Early glass work consisted of various processes of taking crushed silica or quartz along with various other aklalis like calcium lime and adding naturally occurring coloring agents and binding agents and then molding, modeling or sculpting the compound under various heating and cooling methods to create bowls, plates, jewelry and other household and later creative works of art.

True glass fusion, which is the heating and shaping of separate pieces of glass under temperatures ranging from 1000 to 1500 degrees, is thought to have originated by Phoenician sailors who discovered the process by chance when looking at what happened to glass shards and broken glass plates when tossed into their seaside fires after a night of cooking and keeping warm. Interestingly enough, the area in which the Phoenicians culture flourished is also the seat where modern-day Lebanon now exists and which back in the time was one of the most important glass making centers for the modern world.

As objects made from glass became more and more popular both from a utilitarian standpoint of its strength and light weight, to its ability to be formed into beautiful shapes and colors, so did the artistry of the techniques used in creating these object become more and more refined. Glass fusion became a highly specialized field of craft for many tradesmen from creating everyday objects such as bowls, plates and jugs, to much prized jewelry like glass beads, to even Egyptian shipwrights who used the technique to create glass “skins” for the vessels.

Even though glass fusion was highly popular in the early first century B.C., it soon found itself fading as an industrial technique when the art of glass blowing became more specialized and was incorporated as a faster production method instead of the glass fusion process.

Thank goodness artisans kept the art alive throughout the ensuing centuries. Although glass fusion experienced a minor comeback during the Renaissance period, it wasn’t until the mid-20th century in the US that the art of glass fusion began to see a serious re-emergence as an art form.

Today, Glass Art, and specifically glass fusion, is more popular than ever, with museums around the world displaying beautiful creations by such well-known glass artists as Richard LaLonde, Ruth Brockmann and Henner Schroder. In addition the growth of Glass Fusion art as a hobby and expressive art medium for the general public to participate in has never been higher. With modern firing equipment, specialized glass materials created specifically for fusing and the ease in which anyone can learn how to create truly spectacular art work with some simple training, Glass Fusion artistry is a flourishing industry.

To learn more about the history of Glass Art and Glass Fusion techniques, check out these books:

Or better yet, discover the magic of Glass Art by joining one of our classes today. Come discover the “artist in you.”